A Son’s Story of His Father’s Passion

The Mushroom Hunter is a Doc Film of Thirty Minutes

Torg and his buddies have hunted morel mushrooms for over fifty years. In this documentary shot in North Central Indiana, hear their stories, learn some of their secrets, and join them for a local hunt. This is a story of friendship and the trials that come with getting older. 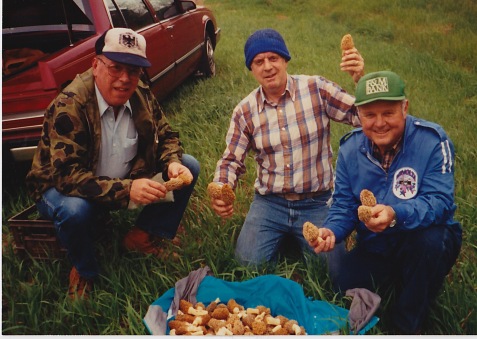 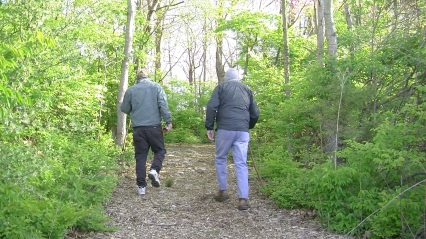 When mushroom hunters begin to talk about how to find morel mushrooms, they talk about hunting trees.

It’s hunting for trees that is why in the documentary film The Mushroom Hunter, you’ll see my dad and his friend Vic looking up in the air and pointing off in the distance so much.

There’s two trees to get started with:

1.  The almost dead or newly dead elm tree. These trees will produce roonies for years. The biggest tell tale sign I’ve heard about is the peeling bark.

2. The living ash tree, most easily identifiable through its white-colored splotchy marks.

the white splotchiness that marks some ash trees

Twenty-five days left to fund the film on Kickstarter

“Tell me about this trail,” I said to my dad. We were at France Park, just outside Logansport, Indiana. I’d driven 700 miles over Easter Weekend 2012 to film Dad while he hunted morel mushrooms. The park used to be a rock quarry, and now it’s filled with water and used for fishing, swimming, and diving. Back when I was a kid, we’d climb the cliffs and jump off of them into the water. It’s been a long time since they allowed people to do that.

“You talking to me?” my dad asked. I immediately thought of that scene from Taxi Driver, the one where Robert Dinero practices a variety of tough guy personas in the mirror. My dad wasn’t angry with me. He really wasn’t sure if I was talking to him or his friend Vick Heater. It’s just that the default tone of his voice often seems to offer a challenge. Finally, at the age of 42, I sort of understand this aspect of his personality.

I filmed my dad for a documentary I’ve nearly completed entitled The Mushroom Hunter. When you edit a movie, you really get to know the subject material. Although dad and I have talked only a few times in the last several months, I’ve been watching him on the computer screen nearly everyday. I’ve been reflecting on his mushroom hunting and thinking about the lives each of us have lived so far.

I think a son might tend to focus on the ways in which he is different from his father, but there’s nothing like pouring over the footage to be reminded of all we have in common. For example, the film notes that my dad has driven as far South as Memphis and as far North as the Upper Península of Michigan to hunt mushrooms. I note this as potentially odd, (dad himself notes that his friends wonder if he’s gone crazy) and then I realize that I have driven even further to film my dad hunting mushrooms. Not sure which of those drives is crazier. So we don’t think twice about driving a long way, and just like dad, I spent a good deal of my working life teaching English and coaching basketball.

Turns out that filmmaking, just like writing, works as a tool for knowing.

above, the guys tell stories of mushroom hunts past