The writers in my classes regularly get into groups and read their writing to one another.  If left to their own devices about what to do in these groups, the students are usually either very quiet or they point out what they see as errors.  In the spirit of trying generate conversation, we read an except from Peter Elbow’s Writing Without Teachers.  During the class before the small group workshops, we practiced the methods outlined by Elbow as a whole class.  There were two brave students who agreed to read their work aloud to the class.  We talked about the text after the reading using the directions below. 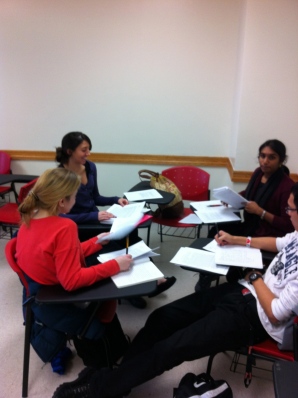 As you share 3-7 with your group, hopefully conversation will arise.

After all the pieces have been read and discussed 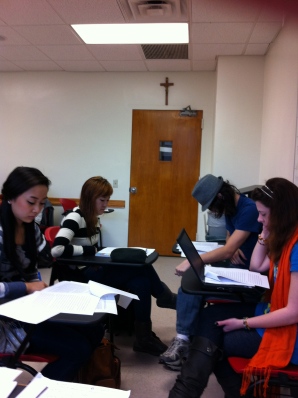 This Semester's Writers Seem Especially Dedicated to the Process

As expected, the groups were slow to start but the students began to relax and talk more as the class went on.  I think I had the students writing too much in their daybooks.  The writing took awhile and I think it killed the conversation.  I think an adjustment would be to have the students write everything that is above except for the movie of the mind.  Someone could just speak that and students could offer their own thoughts in comparison to the one movie of the mind that is shared.

The students bring four copies of the paper to class.  One of those goes to me.  I think next time I’ll have the students write on the drafts instead of in their own daybooks.

Students are often late the day a paper is due.  I had students form groups of four and as soon as they had four, they began the workshop.  They were free to leave after they finished.  Some groups used the full eighty minutes and some were done in an hour.

An Important Book to Me: Donald Murray's Write to Learn

Let me start by giving the writer and teacher Donald Murray props for introducing me to the Daybook in his fantastic research for writing and teaching, Write to Learn.  Along with Stephen King’s On Writing, Murray’s book was a text that caused me to think being a writer was something I could actually accomplish.   For me, the daybook (think black and white Mead composition notebook) is something I use day-to-day in my life and entice (force?) my students to use during the length of the time we work together.  What I love about the daybook is that it enables me to capture many of the intellectual seeds that would otherwise drift into my thinking and then go scattering off into oblivion.

I’m sure a lot of ideas still come and go, but with the daybook, I’m able snag at least a couple and jot them down for later use.  Many of my ideas (especially for teaching, writing, and reading) come while I’m working on something else:  I’m reading student work and I’ve got an idea for next semester or something I need to share with the class.  I’m reading a story and I have an idea for a story of my own or a lesson for class or something I want to tell my wife.   Pre-daybook, the idea would come and go and be forgotten.  With the daybook, it’s down on paper fastened to a place where I can come back to it and take action.

As for Love on the Big Screen and Murray’s daybook, one day while writing with my students, I wrote the following sentence:  “Everything Zuke knew about love he got from the movies.”  That was the seed that led to Love on the Big Screen.  Of course there is a lot of me in this book, but it became an act of the imagination as soon as I accepted the mental premise that Zuke did things because of movies he’d seen.  That became a hook that might sell a book and something that would be a great pleasure for me to write.  I’m thinking of two immediate reasons:  (A) I could revisit all those movies I loved as a teenager and (B) once I made the decision to set it at a fictionalized Olivet Nazarene, I got to use my college experiences as an imaginative catalyst for a plot and characters that caused me to recall many moments I’d long forgotten.  The moments go through a sort of truth to fiction converter once I give them to Zuke’s story and the controlling premise that he does things because of the movies he’s seen.  For myself, back when I was making lots of love mistakes, I certainly had an overly romanticized view of love (who doesn’t?) and I was unconscious of all the influences (media and others) that had helped shaped my romantic paradigm.  In fact, it wasn’t until I wrote the book that I realized what a number films such as Say Anything, Dead Poets Society, Sixteen Candles, and When Harry Met Sally did to my expectations for romance.

from Bruce Barrett founder of IWAGEPEACE.ORG

When I started to make the mental move from basketball coach to writer (not that a person couldn’t be both) the two writer/teachers I began to read were Donald Murray and Peter Elbow.   Many of the professors and teachers around me let me know that these two men were considered to be from the “expressive” school of composition and that if I followed their methods then my classroom would not be a place for political and social change.   In the years that have followed, I have not found the warnings about expressivism’s lack of political impact to be true.

In the writing classrooms I inhabit, my students write in what Murray called a daybook (think writer’s journal) and they use Peter Elbow’s guidelines for sharing their work with one another, and what happens after that often takes on political implications for the classroom and beyond.

What follows are my notes for the reading of a text I choose because I’m thinking about technology, multimodal texts, and how those terms relate to the act of writing.  The text did its work of giving me more to consider, but it also got me to thinking about the social and political change that occurs when people read and write together, whether this happens passing sheets of paper back and forth, posting on Facebook, or creating websites.  If you have any doubt about a blog’s ability to spread any sort of message, take a glance at the map that goes with this blog and check out the location of some of its readers.  Whoa.

Here are some “Golden Lines” and some of my thoughts related to Kathleen Blake Yancey’s “Made Not Only in Words:  Composition in a New Key.” 56:2  CCC. December 2004.