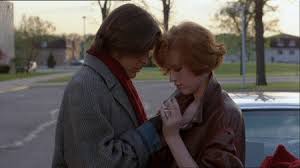 Shall I compare thee to a John Hughes movie?

Thou art Pretty in Pink and sexier than Kelly LeBrock’s lips.

I recall no Weird Science to the chemistry of our first date,

But only your Bueller charm, Farmer Ted wit,

and Some Kind of Wonderful beauty.

You are no Chet, no Principal Richard Vernon on detention duty,

But so thoughtful that you would never forget my birthday

like in Sixteen Candles. Life with you is a Vacation:

racier than Christy Brinkley in that red Ferrari,

richer than the floppy-disk payoff for Samantha Baker’s underwear,

and as magical as Gary and Wyatt’s Barbie Doll ceremony.

While you may not know “If You Leave” was sung by OMD,

Be sure to know that I love you and your love gives life to me.

Thanks to Shakespeare’s Sonnet 18 for getting me started.