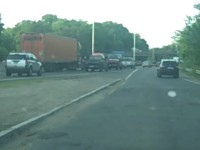 Ready to Merge on I 95 After Filling Up the Tank

Whether I’m reading the latest news in the New York Times about the BP oil spill or watching a documentary such as Michael Moore’s Fahrenheit 9/11, it doesn’t take me long to feel about as angry as I can get at the big oil companies.  It’s another sledgehammer blow to Louisiana and her neighbors, where the environment is getting shellacked as if it’s a chocolate covered raison and families’ livelihoods are drowning in the murky brown sludge.  In the NY Times, Jill Abramson quotes a fisherman who says, “I’d rather have another hurricane than this.”

Just as I start to get good and worked up imagining all the ways these companies can be prosecuted, I think of something about my own life that reveals my hypocrisy:  three days a week when courses are in session at St. John’s University where I teach, I drive 124 miles round trip back and forth to work. Don’t I do about as much as one individual human being can do to use oil?  Just before the days that gas went from around $2 a gallon up to over $5, I stopped renting, and bought a house up Interstate 95 from Queens.  Up in Connecticut was the only place—and this was with extra help from a relative—where my family could afford to purchase a home.

People are asking me why I don’t take the train.  I did once:  the Metro North to Grand Central, a short walk to the “F” train in Manhattan, out to Central Queens, and another half mile walk up the hill to campus.  Door to door it took me three hours one way to get to my office.  I don’t see me extending my two and a half hours a day on the road in my car to six hours on trains.  I’ve put my house up for sale, in part, so that I might move closer to where I work.  This would save me money and by buying less gas, I suppose I would lesson one little pin prickle of the thirst this country has for oil.  But considering that plan now, it feels like a pretty measly step on my part that doesn’t cause me to feel like any less of a hypocrite.