We parked behind Southern Rafting on Riverside Drive and put in the river about mile 76. We portaged around the dam on the left. There is a grassy embankment just past the “Danger” signs that hang across the river. We felt nervous about going under the warning signs and getting that close to the dam.

We knew portage was possible because of the explanation in the River Keeper’s Guide to the French Broad. We’d also heard two people, Yukon and Bean, say that they had done this at a talk they gave at the Asheville REI store. Those two rafted the French Broad and camped at night rather than go home every night like we are. We are considering a night of camping before we finish up the river.

We were fortunate that the water in the river was barely moving, more like a still lake than a river. On other days, the current was stronger.

Once out of the river, we had to carry our raft up a pretty steep hill, walk along the railroad tracks for approximately 15 yards, and then we carried our raft back down to the water.

The first mile or so down the river was very difficult because of all the rocks. We spent a lot of time out of the boat trying to get over and around the rocks.

Since we started at the headwaters in Rosman, NC, these were the first significant rapids we saw. We got stuck on a rock in a rapid called Poop Shoot for a bit, and we went over some ledges several feet high.

We intended to take out of the river at Rollins Access. Upon arriving to the general area, we couldn’t figure out where it was. We parked our van at a business with big trucks that seemed to have a lot of extra parking. It was Sunday, and so we weren’t too concerned much would be happening there. We then drove back to the put in to do our trip.

It turned out we were mistaken about where we thought the access was and we took our raft out of the river in someone’s yard. The set up was that peoples’ houses were on one side of the road and they owned the land along the river. We didn’t actually encounter the home owners but a nice man told us where the park was. I don’t think the access area gets much traffic.

We should have kept driving past the business just a little bit further. Rollins Access is recognizable for its metal picnic tables and a small pavilion. You couldn’t get a boat in here. The yard we used to get our raft out was easier where we took out than this access would have been. 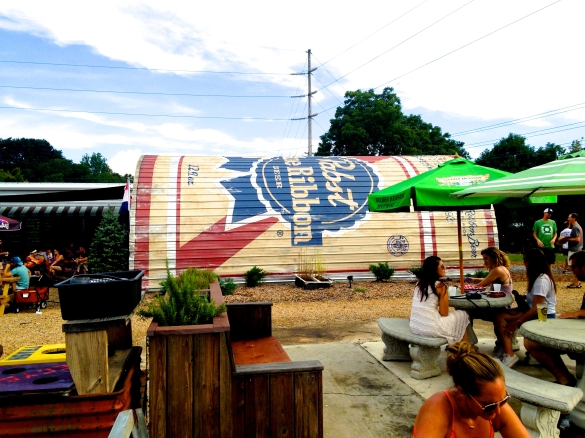 Awesome: we stopped by the Salvage Station on our way home.

Got questions, comments or ideas for our project?

Love to hear from you!

Thanks for being interested in what we are up to at Torg Stories!