The French Broad River runs right through where we live in Asheville, North Carolina and everywhere you go there are kayaks perched on top of automobiles. With daughters the ages seven and ten, my wife Megan and I thought we’d enjoy either tandem kayaks or maybe a raft. The typical tandem kayak in town went for around $800 and rafts like what I thought we’d need ranged from $2,500 to over $5,000.  Not knowing if we’d actually enjoy our time on the river (would it be too slow? too much of a hassle to get the boat in and out of the water and cars arranged at the appropriate geographical points) I thought I’d see if I could find anything used. There was almost nothing for sale. I took this to be a good sign. People were buying kayaks and rafts and liking them enough that they weren’t for sale. Check Craigslist for exercise equipment and a different story is told.

“I like the idea of us being together,” my wife Megan had said. And so we decided on a raft for the whole family and the best deal on a used one I could find was in Harper’s Ferry, West Virginia. This is about 470 miles from where we live. I’d vaguely heard of the town as one where the Appalachian Trail passed through.

Would I really drive seven hours each way for a used raft?

Turns out, I was willing to drive even farther than that. First I thought if we added The Skyline Drive in Virginia and the Blue Ridge Parkway in Virginia and North Carolina, we could make a family trip out of it. Megan said she and her parents used to go on such trips as vacation. Now we wouldn’t be so crazy, going so far for a used raft. We were going on vacation!

The plan evolved and we decided we would also buy a tent and do our first camping as a family. Why not take our dog Indy too?  The following pictures show a little of how our pilgrimage went:

loaded up and ready for take off

destination #1: the nice folks at River Riders in Harper’s Ferry

ready for picnic dinner on the Skyline Drive

Not long after dinner, we saw our first bear. Actually we saw three of them, a mother and two cubs who’d climbed up a tree. We saw this from The Skyline Drive. There were several cars pulled off to the side of the road, and probably ten or so people pointing up into the trees. At this point, my youngest started keeping track of the wildlife we spotted. 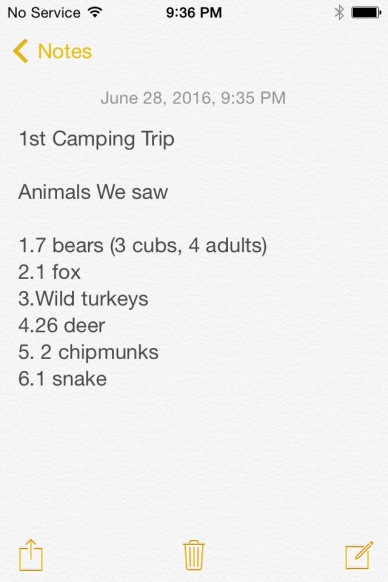 My Youngest Kept Track of Our Wildlife Sightings

Not long after the first bear sighting, I hit one with our van. I was driving around a corner, my sight impaired from the sunset, when I could just make out a bear when it was only a few feet from our bumper. I hit the brakes and gently turned away from the bear as it rammed the front left of our car. With no shoulder to pull onto and because we were on a curve, we didn’t stop right away. The bear was not visible in the rearview mirror or the side mirrors. Looking back, it seemed to be gone, having run off into the woods. We stopped at the next pull off and inspected the car. There was a small scratch and the bumper was covered with bear slobber. 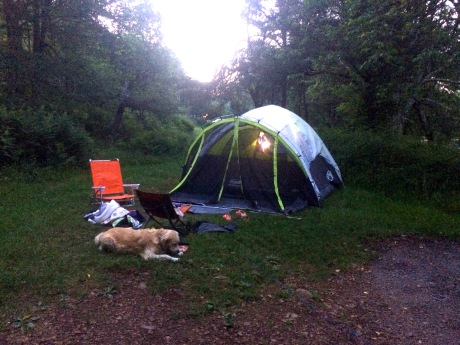 Our campsite at The Meadows on the Skyline Drive

the first bears we saw

deer near our campsite 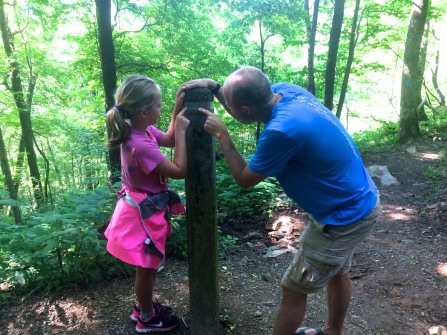 Now which way are the falls?

another good dinner spot: at Peaks of Otter Lodge off the Blue Ridge Parkway

Reports from our raft on The French Broad River