For the Love of Books is my documentary film about Kathy Patrick’s Girlfriend Weekend.  I’ve entered the film in five festivals. If you don’t know Kathy, she’s the founder of the Pulpwood Queens Book Club, an organization which now has over 500 chapters worldwide. Each January, Kathy hosts a “Girlfriend Weekend” book party that brings over fifty authors and three hundred book club members to Jefferson, Texas. This film captures Girlfriend Weekend 2012.  I edited the film on Apple’s Final Cut Pro X and shot the video on a JVC GY-HM 150 U.

Please consider “liking” the post and sharing the link on Facebook. I think you’ll get a laugh out of Wade’s costume and from some very funny lines from talented Pulpwood Queen Authors. Thanks to Kathy Patrick for putting this event together! 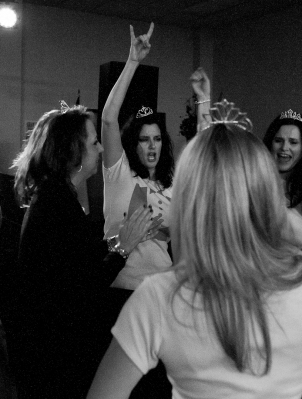 At the Pretty in Pink Prom Party
Photo by Natalie Brasington

One thought on “Trailer: For the Love of Books”