If you know my character “Zuke” from Love on the Big Screen, I wrote that he was from a small town called Horseshoe.  In my mind, Zuke’s hometown is a fictionalized version of Winamac, Indiana.  The word “horseshoe” as the title of my novel-in-stories comes from the way my small hometown of Winamac sits on a horseshoe bend of the Tippecanoe River in North-Central Indiana.   This geographical feature is something you can see for yourself on Google Maps: 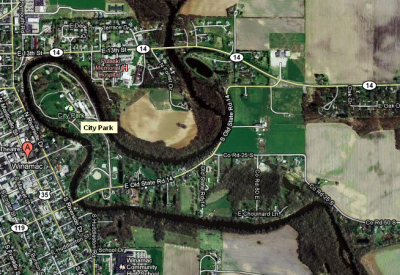 From Google Maps: See the Horseshoe Bend in the Tippecanoe River?

Winamac is the town where my parents are from and their parents are from before that, and even though I wasn’t born there, it’s the place where I graduated from high school and the place I say I’m from if anyone ever asks.  When people in Winamac say the horseshoe,they mean the road that runs along the outer edge of the town park which is almost pinched into an island by a sharp-hook bend of the river.  I lived in two different houses when I lived in Winamac:  one right on the river where I could look across the water, see the road everyone called the horseshoe, and also the basketball courts.  I was a bad cross-country runner in high school, and practice was often held in the park where we ran in packs and did repeats of the three-quarter mile loop.  The second house I lived in is the house where I placed the character Matthew Walker’s family.  Pam Scott, a woman haunted by the sound of a knocker, lives in the house my grandmother lives in today. 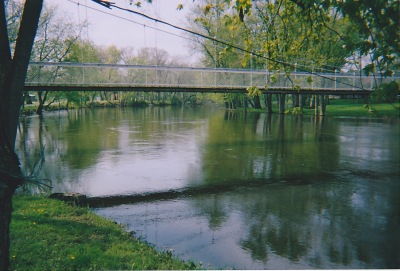 The Swinging Bridge in the Winamac Town Park